The least expensive house that sold in 2010 in Travis Heights was an estate sale and was listed in poor condition. That home sold in just two days for $145,000!

(note: price per square foot is interesting when considered as part of a large body of data. It does not, and cannot, indicate that any particular property’s value can be determined by the median, or average for an area. The median is the number at which half of the numbers were above that point and the other half were below.) 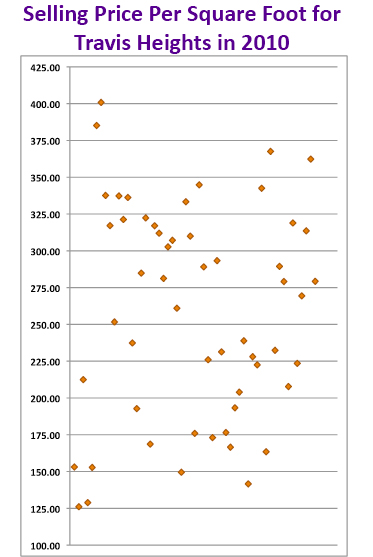 Houses in Travis Heights range from over 70 years old to brand new, with sizes and styles ranging from tiny 700 square foot bungalows to 4000 square foot and larger modern and eclectic homes.

Photographs of Homes in Travis Heights

Please note: these are NOT houses that sold recently, or that are currently for sale, but are instead photos of homes that are characteristic of this area of Austin.

Travis Heights in zip code 78704 is bounded on the North by Lady Bird Lake, the west by Congress Avenue, the East by I-35 and on the South by Oltorf.