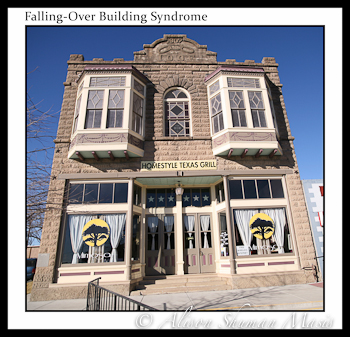 See the really crappy architectural photography example at right in the photo we took in Taylor, Texas last month.

(Seriously, we took that one and brought it home to edit planning to use it on this site, and not as an example of bad real estate photography!) 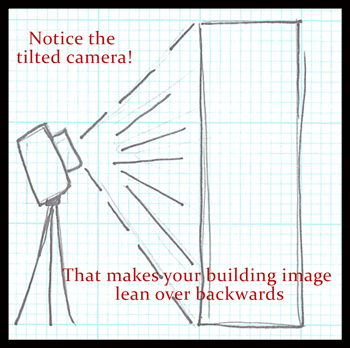 How Does Perspective Distortion in Photography Happen?

What do we naturally do when we want to photograph something that is too tall for the normal view of the camera? We lean back and point our camera upwards, effectively tilting the plane of the sensor of the camera away from the building. Even a little tilt like this can introduce visible perspective distortion.

If we’re really lucky, or really in a hurry, we might not even be standing front-and-center of the building, and then we have a leaning back, leaning over, all edges wonky building in our photo, like the first one in this article.

To give you some incentive for reading more, here are two photographs to better illustrate what I’m talking about, although both were taken with the same Canon 24mm f/3.5L Tilt Shift Lens, only the second one employed the Shift function of the lens. 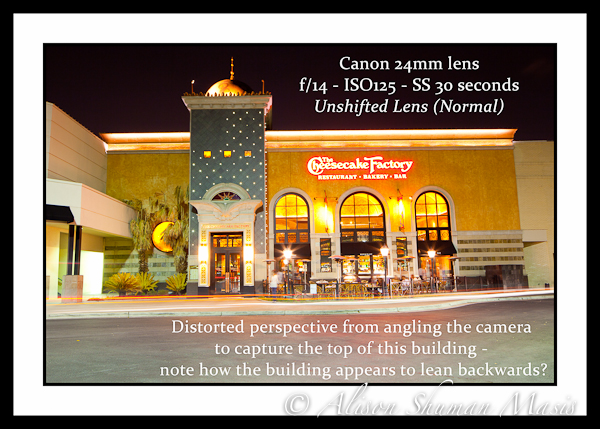 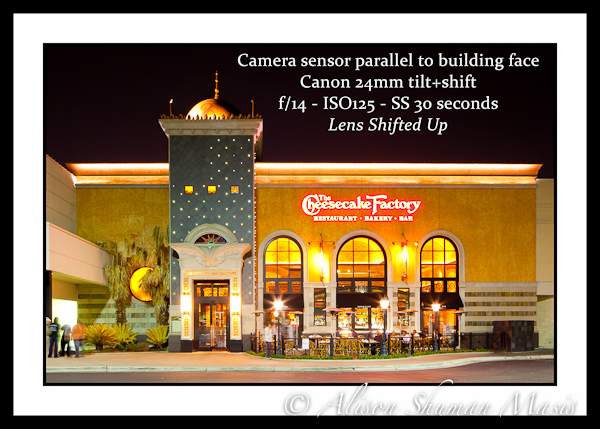 Now, that wouldn’t be the best example of architectural photography or real estate photography but it should suffice for the purposes of this article. I was really trying, really I was, to get you a few really good ones. We packed up the kids, and headed over to my current favorite spot for architectural photos in Austin (Mueller), had dinner, then located the PERFECT building! It was tall, well-lit at night and free of parked cars in front. I enlisted my 9 year old son’s help and set up the tripod and the camera. And then, Oh No! No CF card! Augh! Not in the camera, my bag or the car! Augh! Drove home, grabbed the CF card and went back to the Arboretum with just my 4 year old son in tow. While he worried me by playing on the grass of the parking median, doing flips and singing really loud songs, I set up the tripod in the middle of the street and waved cars around me while I grabbed a few shots for this article using the tilt shift lens that has become my favorite lens of all time!

Methods for Avoiding or Correcting for Architectural Perspective Distortion

There are a few different ways to avoid, or correct for the perspective distortion in real estate photography commonly seen as FOBS (Falling-Over Building Syndrome). Let’s talk about the ones that don’t use a tilt shift lens, first.

1. Back Up, No, Back Up Even More
You can back way up, until the whole building is in your viewfinder, without having to tilt your camera upwards.

2. Stand on Something Really Tall
You could also stand on something really tall, like a really tall ladder, or take your image from the roof of a building across the street, or out of the edge of a parking garage.

3. Correct in “Post”
Some degree of perspective distortion can be corrected in post-processing, i.e. on your computer, to mimic the effect of using an actual tilt shift lens. Adobe Lightroom and Photoshop both have the ability to adjust images to re-align out-of-alignment edges and leaning buildings.

4. Use an Ultra Wide-Angle Lens
Ultra wide-angle lenses will permit you to get closer to a building while avoiding some of the need to tilt the camera back to get all of the subject in the frame.

*Whew*, now that we’ve covered some of what you might have been thinking when you first started reading this article, we can get on to the good stuff:

Clear as mud? I thought so! Here is another tilt shift lens illustration that might help. 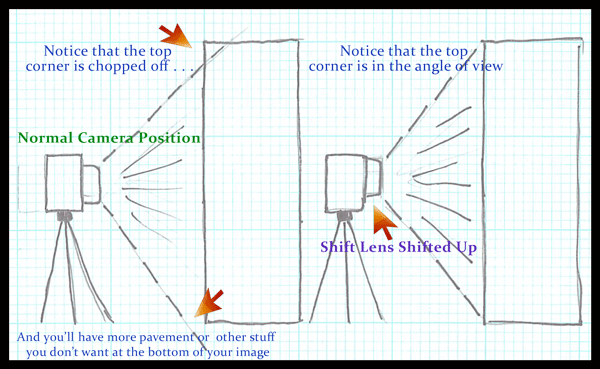 We have a single tilt+shift lens from Canon, the TS-E 24mm f/3.5L II. This lens is a wide-angle lens that is amazingly sharp and distortion-free from edge to edge which means we can take photographs free of architectural distortion. This lens has +/- 12mm of shift capabilities and +/- 8.5 degrees of tilt. (The glorious benefits of Tilt will be the basis of another article). 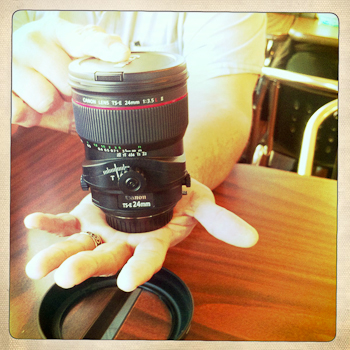 My Canon 5D Mark II is a full-frame camera, with a 24x36mm sensor. This means that the 12mm of shift in the lens is 50% of the height of the sensor. In easier terms, this means that as I shift the lens up, while watching the effect using the Live View feature of the camera (the screen on the back), it’s like someone is raising the camera 10, 20 or more feet in the air.

That means even pretty tall buildings can be encompassed in the frame without having to lean the camera back at an angle – see the images of the Cheesecake Factory earlier in this article – a building that is probably the equivalent of 4 to 5-stories tall.

I did a LOT of research before buying this lens, and even then, I erroneously thought it was the Tilt function I needed.

When the sales guy (Cole) at Precision Camera here in Austin told me it was the Shift feature, I was baffled. I kept asking (over and over and over, because that is how I am), why that was better than just squatting down low, or raising the tripod up higher. I even demonstrated my question by squatting down and jumping up for him.

I had to see it to believe it, so now it is time for a little bit of video so you can see it, too.

Canon makes several lens in their tilt shift line-up. The two most popular ones with architectural photographers are the one we have, and the Canon TS-E 17mm f/4L UD Aspherical Ultra Wide Tilt-Shift Lens.

Check out the video – you might decide that a tilt+shift lens is the next one on your list, too!

Here is a quick comparison between three different camera/lenses. Although the one taken with the Canon 24mm TS-E took longer to set up the shot (5 to 10 minutes to set up and level the tripod), it saved me that much in post. I shoot RAW, so the edits were a quick white balance adjustment, and a contrast curve and that was it. My second favorite lens for shooting real estate is the Canon 17-40mm f/4, one of the cheapest L-glass lenses in the line-up. For a “cheap” leans (about $1000), it totally rocks.  The last photo was taken with an iPhone 6, for kicks and grins.