You are here: Home / Texas Real Estate Reports and Local Interest Articles / The City of Kyle in Hays County Texas – Downtown in Photos

Kyle, Texas – From Small Town to Boom Town: What’s Next? 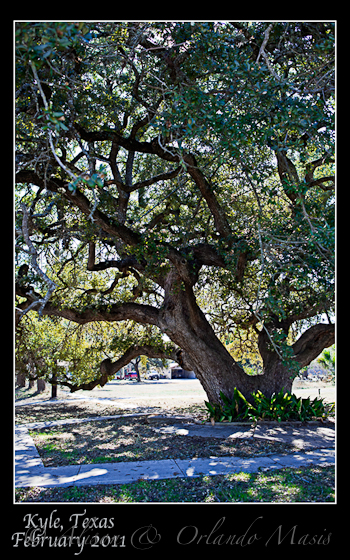 The City of Kyle, in Hays County, Texas, is located along the I-35 corridor between San Antonio and Austin. Since 2000, Kyle has seen it’s population grow by 291%, to over 20,000 residents, according to Sperling’s Best Places.

Because we love driving around small towns, and in particular small towns in Texas, we thought we’d take and share a few photos of the downtown area of Kyle.

According to the City of Kyle’s website, the town was founded in 1880 along the International & Great Northern Railroad by settlers from the communities of Blanco and Mountain City. 200 acres of donated land were auctioned off under the Auction Oak on October 14th, 1880 at the Western edge of what would become the city. According to the Texas Historical Marker (1975) located near the tree, the land was donated by Fergus Kyle (1834 to 1906) and the family of David E. Moore.

(note: all data from the Austin Board of Realtors)

The sales numbers above cover thousands of properties in the City of Kyle, which makes it hard to get a feel for specific areas of town.Some other real estate sales data tidbits you might like, from the Austin Board of Realtors and the REALIST tax database:

Only three (3) of 231 properties listed in the tax database (REALIST) as part of the Kyle Original Town changed hands in 2010.

We thoroughly enjoyed walking around and reading the numerous Texas Historical Markers in the downtown Kyle area, and kept forgetting to take photos! I posted the photos on Flickr a few days after we got home and immediately received a comment asking where the photo was of the giant slice of pie. Apparently, I had overlooked it in the pile, so here is the Giant Slice of Pie, in all it’s glory! 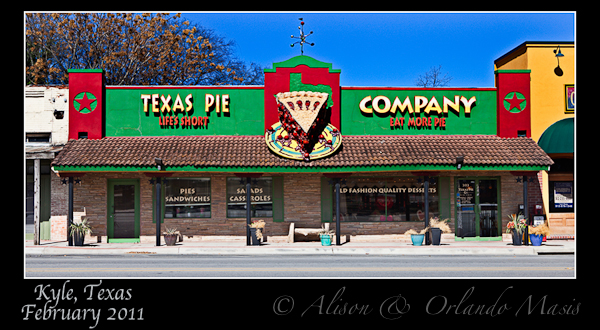 Unfortunately, we passed through town at the wrong time of day for taking the best photos – the sun was high in the sky, which makes for contrasty photos and long harsh shadows. Fortunately, the glorious warmth of the Texas sun in February made walking around a true pleasure.

True Americana Through the Lens

Since we started posting photos of our small town adventures on Flickr, we’ve realized that lots and lots of other people share our various passions.

Mine include taking photos of old signs, rusty vehicles and farm animals. Orlando and our oldest son, 9, gravitate towards photographing the Harley Davidson motorcycles that are in abundant supply in Central Texas. Of those categories, we found just this old sign on the side of an old grocery store on the main drag.

Do you have signs like this where you live and is someone capturing them on film or digital media so they aren’t lost to the future?

Want more information about what’s going on it Kyle and the rest of Hays County? Subscribe to the Hays Free Press and be in the local know.