You are here: Home / Archives for homes in crystal falls 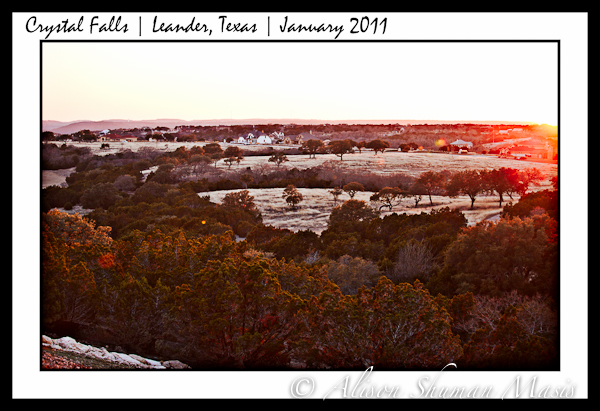 We certainly do. The almost-600 homes in the Grand Mesa section of Crystal Falls are situated on large home sites with native trees, and many have sweeping view of the Texas Hill Country. We just barely caught the photograph of the view shown above right as the sun was setting late on a winter day.

A few the homes in Grand Mesa at Crystal Falls are at the Western-most edge of Williamson County while the rest are in the Northwestern part of Travis County. All are in the city of Leander, Texas and are served by Leander ISD.

Here is a brief chart that shows the comparison for the homes that sold in 2009 and 2010: 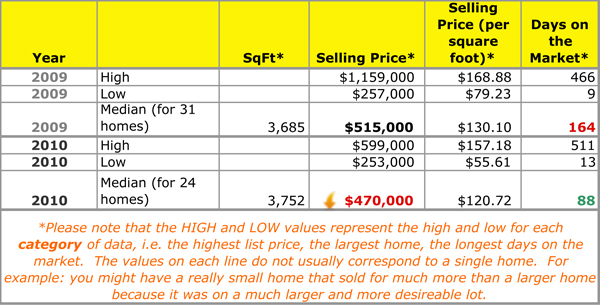 You can see that although the median size of the homes that sold in Grand Mesa at Crystal Falls rose slightly in 2010, from 3,685 square feet to 3,752 square feet, the median price dropped by $45,000. 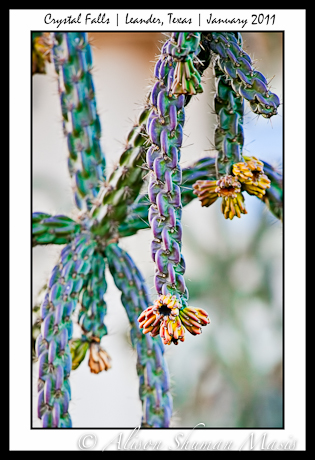 We’ve put pins on a Google Map at the bottom of this page to give you an idea of the area of Crystal Falls that this data corresponds to.

In addition to sweeping Hill Country views, Grand Mesa at Crystal Falls has a LOT of native Texas limestone, used for the exterior of homes, for extensive landscaping of homes as well as common areas, and along the carved out stretches of road that traverse the area. Stacks of limestone also define the entrance to Cap Rock, as part of a small mad-made waterfall.

We also noted a deer hiding at the edge of a small forest, and some cacti, also used as drought-resistant landscaping. We particularly liked photographing the cacti because of the intense coloration and prickles. 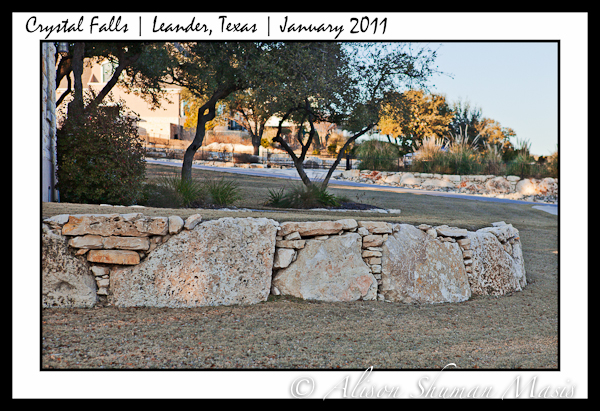 Photo Gallery of Homes in Grand Mesa at Crystal Falls

(note: the homes shown in the photos below are not necessarily for sale, and have not necessarily sold recently. We selected these homes for the gallery because they are representative of the homes in the area and showcase a wide variety of architectural styles and materials.)

One of the draws of this are is the Crystal Falls Golf Club and Course, located Southeast of Crystal Falls Parkway, at the Southeastern edge of the Grand Mesa at Crystal Falls subdivision. For 2010, club membership rates began at $1200 for an Annual Weekday Single Membership.

If you decide to play Crystal Falls, you’ll want to bring a lot of extra balls. The course is well-known for sloping fairways that will send your ball off into the grass, or off of a cliff.

(note: the pins are on the streets where homes sold, NOT on the actual address, lot or location. This is to give you an idea of the distribution of the homes that sold in this area. All data from The Austin Board of Realtors ACTRIS system.)

We’d like to extend our appreciation to Bryan McDonald of REbliss.com. His post about Showing Geographic Competency for Appraisers has a great video that shows how to put pins on a Google Map for a bunch of properties.