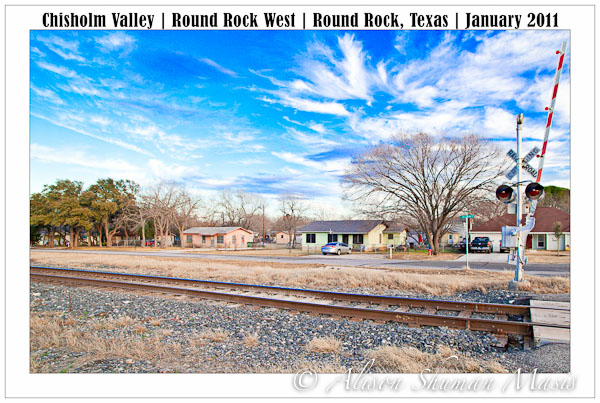 Chisholm Valley West, Old West Addition, Chisholm Valley South and Westwind are subdivisions in Round Rock 78681 bordered on the North by McNeil Drive, the East by I-35, the South by Hesters Crossing and the West by County Road 172. This little neighborhood is wedged between the rail road tracks that run along McNeil and the popular La Frontera shopping area.

Chisholm Valley residents enjoy easy access to Texas 45 (the Toll Road) and I-35 are part of the acclaimed Round Rock ISD.

Most of the homes in this area are older than the typical subdivision home in Round Rock, and are part of the Round Rock West (RRW) area in the local real estate MLS maintained by the Austin Board of Realtors (ABoR), aka ACTRIS. The typical lot is about 8000 square feet (.18 acre) and a typical home is under 1,300 square feet. Most of the homes were built in the 1970s and 1980s but some have been built more recently.

One thing we noticed while driving around this are was that several of homes had boats parked in the driveway.

The Train That Went By

Yes, this is the actual train that zipped by as we were driving around the Chisholm Valley area. It has been turned into digital art.