Have You Handled a Texas Almanac Lately?

I picked one up for the first time at the Texas History Museum yesterday afternoon and have barely put it down since. I had it (wrongly) in my mind that Almanacs are things for farmers, things of the past, something antiquated.

No one handed me a copy when I drove in from out of state, and it’s not like it was in my basket from the neighborhood welcoming committee (all they wanted, actually, was the voluntary $40 owners’ association dues) when I bought my house.

Why You Need a Texas Almanac

We went to the Texas History Museum on Congress and MLK in downtown Austin specifically to look at books about Texas history. I expected to find a few, but found a ton, most of which were either tomes about war heroes, famous battles or politicians. I have Lone Star: a History of Texas and the Texans on order from Amazon, 792 pages worth, to be delivered on Monday, so was looking for a little pre-meal snack, a little book maybe about the history of Austin, or of a historic neighborhood, something maybe with a lot of pictures.

Instead, we went home with 2 fold-out laminated wildflower and tree reference guides, the Austin Insiders’ Guide and the 2010 to 2011 Texas Almanac.

Here is what makes it WAY COOL:

Do You Need a Texas Almanac?

If you’re a Texas, yes, you need a Texas Almanac. It’s worth $19.95 to find out what you didn’t learn in school, or never knew you might want to know.

If you’re a Texas Real Estate Professional, you need one even more so: having a deep and complex knowledge and appreciation of what this state has to offer will serve you well, and help solidify your professional knowledge base. If you’re not a Texan and don’t live in Texas, your own state probably has something just as powerful that is worth getting your hands on. 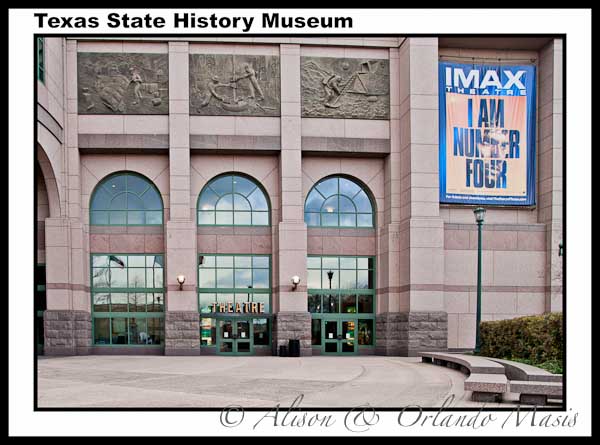 Visit the Bob Bullock Texas State History Museum and get a eyeful of what makes Texas a great state. The IMAX theater has daily showings of two films about Texas as well as regular new releases of popular films.

The Museum Store has hundreds of books on Texas, including detailed memoirs and image-packed coffee table books of everything Texas, broken down into very granular categories so that each book showcases an extraordinary part of Texas life and culture. I had a hard time putting down the one on Vaqueros, full of images of gritty cowboys and their horses, a lifestyle steeped in history, tradition and dust.

Take an afternoon and visit, and on your way out, grab a copy of the Texas Almanac, you’ll be glad you did. 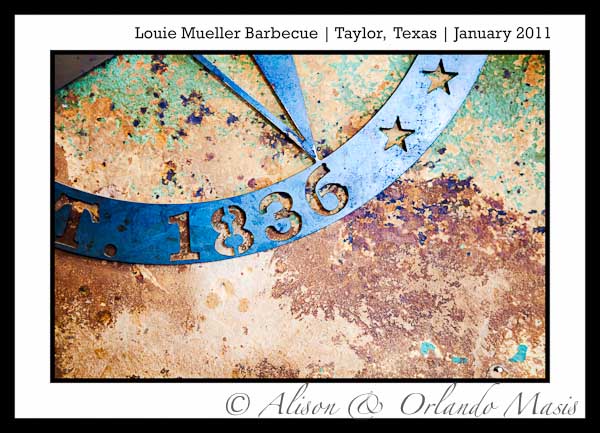 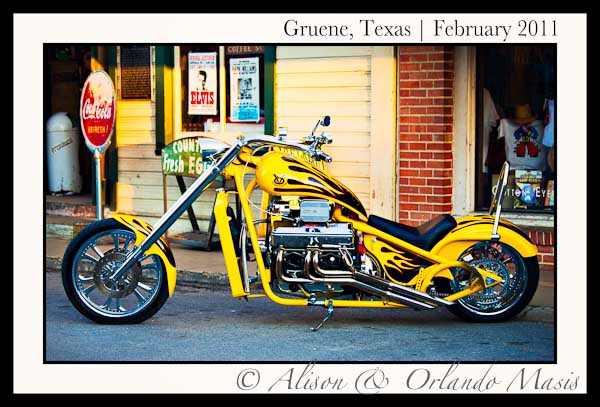 I say “tried” because what we actually did was crank out a bunch of over-or-underexposed photographs, awkward photos of crowds, tilty shots of buildings obscured by pick-up trucks and, well, not a whole lot of good anything. (But, hey, we’re going to share them anyhow!)

We knew Gruene was popular but we were totally unprepared for the absolute mob scene of a Saturday afternoon, drawn to the area by wineries, excellent local bands, great food and sunshine. We couldn’t get a clear shot of anything, and finally walked over the bridge and hung out with some bikers. Well, not the actual bikers, but their bikes, making sure not to get too close.

Since Austin hosts several jam-packed biker rallies every year, we knew there were a lot of Harley Enthusiasts in Central Texas. We were still spectacularly pleased to find so many gorgeous bikes hanging out at Bubba’s Big Deck and almost completely forgot we were supposed to be looking for historic buildings and Texas historic markers.

(Note: we don’t cover Gruene with our appraisal business, so you won’t find the usual real estate data for the area in this article.)

Harley Davidson, Born to be Wild 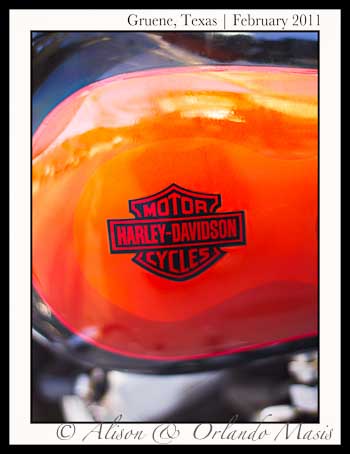 Okay, so not all of the bikes we found were Harley’s but the majority sure were. Red ones, orange ones, even pink ones! We started tussling over what we call “the bokeh lens”, the little 50mm 1.4 lens that gives a nice shallow depth of field to photographs, with a nicely blurred background (the bokeh).

Our oldest son, 9, won the toss, and got a bunch of up-close, but not too close to touch, shots. When we got home, we all wanted to see bike shots, not building shots, which probably explains why the building shots we did manage to remember to take, or sneak through the mobbed streets, are all less then stellar.

If you’re from the area, what day is Gruene NOT packed? We’ll come back and visit!

I fanatically prefer detail photos when it comes to motorcycles, so here’s the line-up of keepers:

Since the crowds were uphill from Bubba’s Big Deck, we spent some time gazing at the waters of the Guadalupe River, which runs around the Western side of the town.

The Guadalupe River runs from Kerr County, Texas to San Antonio Bay on the Gulf of Mexico. The stretch of it that runs by Gruene is a popular place for toobers, or folks that want to float in tubes down the river. We haven’t been yet, but can’t wait to go when out littlest gets bigger.

After some time spent gazing at the water of the Guadalupe, we walked back up the hill into town, wedged ourselves into the crowd and enjoyed some of the Gruene weekend flavor. The Gruene General Store is jam-packed with stuff that tourists love, including Blue Bell ice cream and old rusty metal signs high up on the walls – authentic signs, not the replicas employed by some chain restaurants for “atmosphere”. The building housing the store was built in 1878, and has all of the earned character of its’ age.

Breaking free of the crowds, we wandered to the outskirts of the two-block downtown, near Buck Pottery Fine Crafts Gallery and had a shoot-the-berries contest, where we all tried to get the best berries-and-bokeh shot, where little red berries are in crisp detail but all of the surrounding foliage is blurred. We all failed, so the only salvageable shot became digital art, which is what I do with some images that just aren’t good enough to really show you what they look like.

(If you’re learning photography with a DSLR, try taking photos of berries – use your widest lens, i.e. the one with the biggest maximum aperture (1.4, 1.8, 2.8) for shallowest depth of field (DOF) – you’ll learn a LOT about DOF and how aperture affects it, and might get some nice shots with intentionally-blurry backgrounds (bokeh) in the process!)
As the day wound down, most of the crowds melted into the various places for food around Gruene, to listen to the live bands and drink some local Texas beer and wine. We took advantage of the merely-crowded-not-packed streets to take a few photos of the main drag to share with you.

According to the historic market at the bridge, Gruene was founded in 1872 and served as a commercial center for the local cotton farmers of Eastern Comal County for over 60 years, until the 1930s. The website for the Gruene Historic District says that German farmers began settling the area in the mid 1840s. One settler was Ernst Gruene whose second son, Henry D. Gruene built the Gruene Mansion Inn to use as his family home.

In the 1920s, the town of Gruene faltered, and the Great Depression and the boll weevil took their toll on the area and the town fell into disrepair. According to the Texas State Historical Association, the boll weevil migrated across the Rio Grande in the early 1900s and by 1903 the critters covered all of eastern texas. The boll weevil infestation destroyed cotton crops and caused a significant decline in cotton yields for over 30 years, which was devastating for the Texas cotton farmers, including those around Gruene. (Flickr has some incredible macro (close-up) photographs of these insects, which you might find as fascinating as my sons did.)

Pat Molak is credited with the town’s revival in the 1970s when he fled the big city, bought Gruene Hall, fixed it up and then worked to resurrect the rest of the town with his friend Mary Jane Nalley. I have to tell you, I’m tearing up as I write this because it is so important for all of us to recognize what we’re losing when we let towns disintegrate into the dust of Texas – we lose history, we lose opportunity, and if we’re not careful, we could lose a lot more! 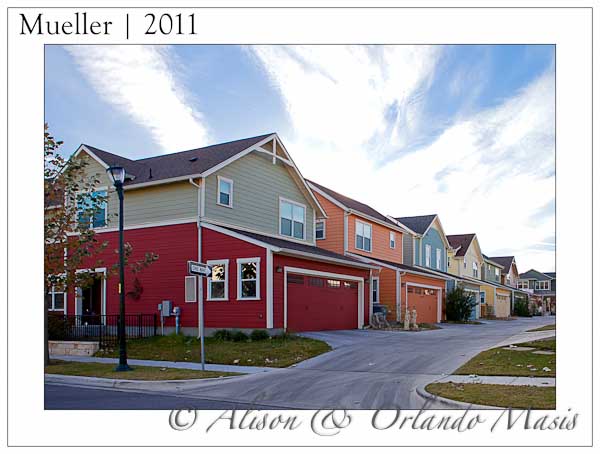 What do you do when you have a giant swath of urban land, much of it paved over or living as giant, weedy lots?

If you’re a smart developer in Austin, TX, you build ecologically conscious (aka “green”) homes and mixed use buildings at an old city airport (aka RMMA), and enable more people to live and work in closer proximity to the heart of the city of Austin. 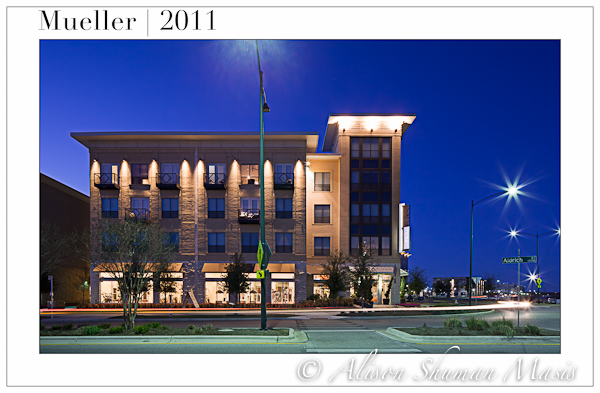 The old Robert Mueller Municipal Airport (RMMA) on the East side of Austin has green homes, a high concentration of pediatric medical specialists (‘Specially for Children), Dell Children’s Hospital, plus lots and lots of big box shopping.

All of this is surrounded by some remaining weedy lots, the old airport control tower, and lots and lots of carefully-maintained community spaces – walking paths, ponds, playgrounds and lush landscaping – well, as lush as it gets in central Texas.

How is the Market in the Mueller Development Area? 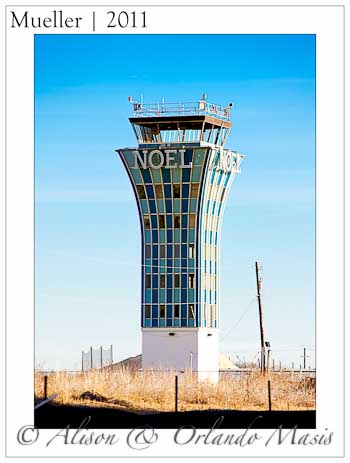 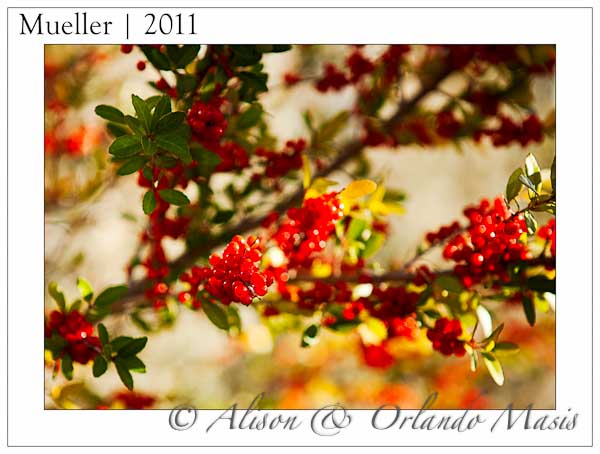 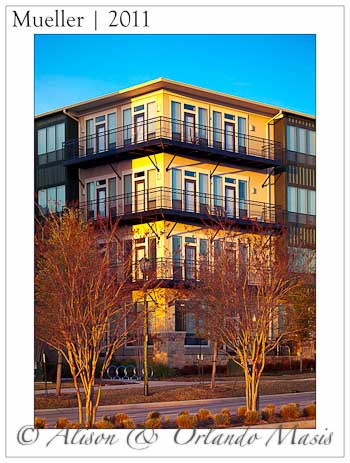 Was 2010 a better year for home sales in Mueller? You be the judge.

A Huge Number of Photos from RMMA – Mueller Austin Texas 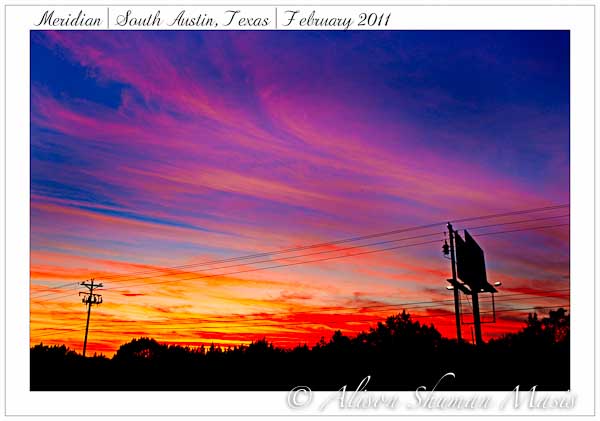 The Subdivision of Meridian in South Austin (Travis County) has almost 800 lots with homes built of brick and limestone built between 2005 and 2010. These homes are situated on lots that range from under 6,000 square foot to just under an acre, with a median lot size of about 9,000 square feet (.21 acre).

Homes in the Meridian Austin subdivision range from 1,820 square feet to over 5,300 square feet, with a median size of 3,168 square feet.

This area is near Circle C, is served by Austin ISD and has easy access to ample shopping and Golf! 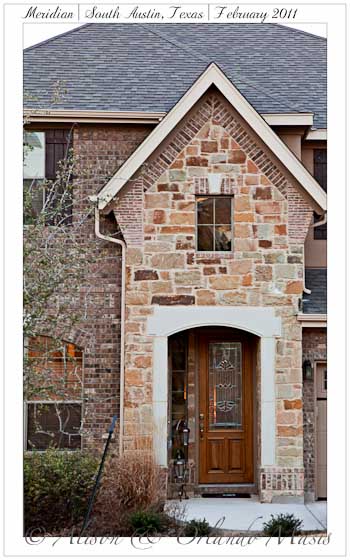 15 homes are currently for sale in the Meridian subdivision in South Austin. 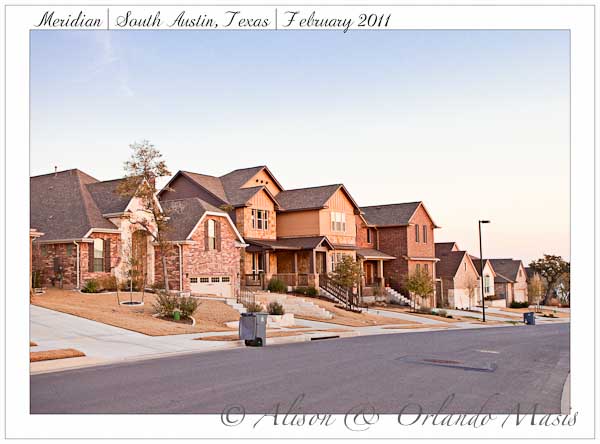 You can see from the photos around the subdivision that unlike many other developments, the builders have taken care to leave many original tress from this part of the Hill Country. Many homes also have little trees planted in the front yard which should grow into nicer sized trees in the next few years. 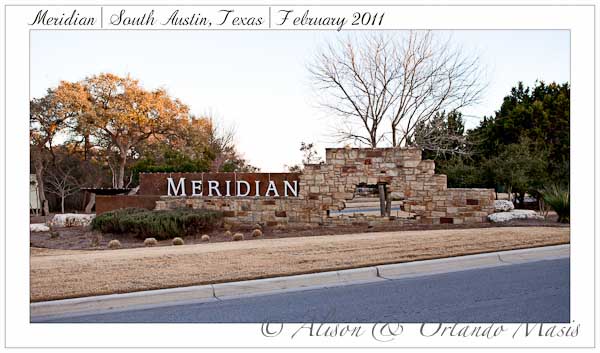